Al- Safef District: Al-Salif District is located 70 km, approximately, northwest of Hodeidah city. An asphalt road, branched from Hopdeidah – Gizan highway, links it with Hodeidah Governorate and is separated from Kamran Island by 3 sea miles, only. Al-Salif District is famous for its location as a natural harbor and is distinguished with the natural depths from 20 to 35 meters.

Thus, it is considered one of the most import ports of Yemen. It has a furnished pier for the anchor of giant boats in addition to the facilities of silos, wheat and cereals mills. Moreover, it is famous of its quarries of the gypsum and high purity rocky salt, which is considered one of the best types of salt in the world due to its containment of the natural iodine, which was discovered in the year 1880. Its reserves are estimated to be about 150 million tons. It is extracted and imported to different countries in the world. Also, quantities of gypsum are imported to abroad. Salif is also considered an important center of the production of traditional ships and boats and handicrafts

Population of Al-Salif District is about 6,388 persons, according to 2004 census. Administratively, Ras Essa, which the Yemeni oil is exported through it, is its subordinate. Within its boarders, the shore of Jaber sea, which is considered a summer residence, recreation resort for practicing waters’ sports, is found.

– Importance and Privileges:-
-Al-Salif Sea Port has strategic importance because it is distinguished with great depths enable it to receive giant ship., it is protected by Kamaran Island as natural protection from the waves to which form a safe anchoring district, and also it can receive the transit ships. For all that privileges, the is allocated to receive the wheat, corn and the bulk material vessels.

– Purpose of port establishment:
-To utilize from the natural features that the port is distinguished with in order to hold new generations of giant ships of large weights, requiring very large and wide depths.
-The State trends to construct new ports for the purpose of creating new opportunities for development, investment and find new job opportunities for the labor power in the District.

•Navigational Features:
-Depth : 14m .
Navigational passages : -There is no length of width for the navigational passage and no specified diameter for the turning circle because the depths are natural, where such depths are between 15– 22m .
Approaching District :
-There is a route which determines the entering degree in respect of Al-Salif block house and run n line 060
-There is another run in / entering from the north of Kamaran Island, which is the main and the approved entrance.
Guidance: – It is obligatory at the beginning of the main entrance.
Tugging : – It is obligatory in Tracki District. 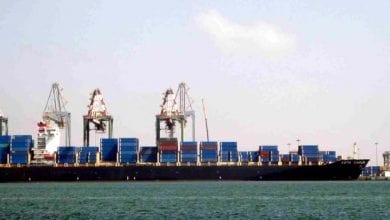