CAMA  Board of Directors reviewed in its meeting convened on 18th August 2020 that was chaired by H.E. Minister of Transport- Brigade/ Zakaria Al-Shami the issues related to developing the work of CAMA and the future plans for the projects included in the National Vision for Building the New State of Yemen.

The meeting that was attended by the Chairman of CAMA- Dr. Mohammed Abdulkader and the members of the Board discussed the technical and professional aspects and the mechanisms of CAMAs restructuring based on the world developments and in accordance with the ICAOs requirements.

Meanwhile, the meeting also discussed the status of the medical care and health insurance of CAMAs employees and the possibility of resuming the training courses in the Civil Aviation & Met. Institute that were halted because of the Corona Virus Pandemic. The meeting stood in front of a number of future projects that contribute in developing the work of CAMA at the civil aviation fields and air navigation services under the National Vision of Building the New State of Yemen and in accordance with the ICAOs requirements such as the New Sanaa International Airport Project.

In addition to that, the meeting reviewed the revenues improvement project and finding other alternative resources to ensure the sustainability of the work of CAMA in the field of air navigation particularly under the continuation of the aggression and blockade imposed on our country for six years.

On the other hand, the minister of Transport stressed on accelerating the completion of CAMAs new Organizational Structure and work to correct the defaults in accordance with local Laws and Regulations and the international standards which cope with the developments and ICAOs requirements.

The Minister- Al-Shami instructed the Weather Meteorology Sector to prepare a scientific study for the climate diversity and weather forecasts in our country for the coming days to submit it to the Supreme Political Council and to provide clear vision for meteorology and climate changes to ensure avoiding disasters that might take place as a result of heavy rains.

On his part, the Chairman of CAMA stressed that in spite of the aggression and blockade, CAMA was capable to continue its work and preserve its professional sectors. He also pointed out that CAMA have professional and qualified cadres in all the sectors which contributed in developing the work and providing air navigation and civil aviatio\ 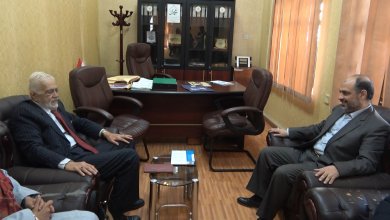