Captain / Muhammad Abu Bakr Ishaq, Chairman of the Board of Directors of the Yemeni Red Sea Ports Corporation, he disclosed that the total losses and direct damages – incurred by the Yemeni Red Sea Ports Corporation as a result of the aggression and blockade since March 26, 2105 AD until December 31, 2020 AD, amounted to two billion and 160 million And 316,210 dollars.

The Chairman of the Board of Directors of the Foundation, Captain Muhammad Abu Bakr Ishaq, stated that the committee concerned with assessing the damages has identified the amount of one billion and 240 million and 127 thousand and 210 dollars for the losses of the institution, and the amount of 920 million and 189 thousand dollars as societal losses.

He pointed out that the aggression targeted the port of Hodeidah with systematic bombing, in an attempt to disable it from its job and completely remove it from service.

Noting that the port of Hodeidah receives about 70% of the needs of the Yemeni people and 80% of the humanitarian aid, considering the aggression and siege that the port is exposed to, a war crime and a crime against humanity.

Stressing that the continuation of the aggression and the siege will multiply these damages and numbers … indicating that despite the importance of the port of Hodeidah to the Yemeni people and humanitarian organizations, as it is the largest artery that pumps supplies and humanitarian aid to most of the central, northern and western governorates that have been affected by the aggression and siege, the situation It remained standing as it was and still suffers from blockade, detention and piracy of the warships of aggression for ships arriving to it and obstructing it, and it did not receive any real international or international interest or support, despite the visits that it witnessed and witnesses repeatedly from the United Nations missions and organizations and their assurances of the importance of the role of the humanitarian and service port .

He said, “What donors have allocated for the development of Hodeidah port in the amount of 7 million dollars is not worth anything in view of the targeting and destruction of the port.”

He stressed that there are no pretexts for the aggression against Yemen and the targeting and blockade of the sea and air ports that should not be coordinated within any political negotiations, because international conventions criminalize attacks on ports and airports because they serve the civilian population.

Pointing out that the 2018 Stockholm Agreement was primarily humanitarian, stressing that the outlets must be dealt with as humanitarian outlets, and their violation and closure is prohibited.

He noted that the descendants of the Prophet will not kneel in front of any aggression .. Captain Ishaq added that the Foundation has become dependent on the national vision of building the modern Yemeni state under the directives of the political leadership and the government, and the plans, programs and work matrices it contained within the framework of a five-year plan in 2021 AD. 2025 – 2030 AD, which will be activated in various stages.

The Ministry of Transport is implementing a cleaning campaign

a workshop on maps and shipping lines. 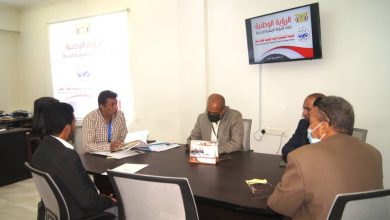