In his meeting with governors of the governorates and a number of state officials, Mahdi Al-Mashat, Chairman of the Supreme Political Council, stressed the importance of improving the general performance of state institutions to ensure a comprehensive recovery of local development, according to the available capabilities, especially in light of the difficult circumstances in which the country has been subjected to aggression, siege and economic war since More than six years.

In fact, the talk of President Al-Mashat was not exaggerated, as corruption is no less dangerous than the external aggression that destroys the homeland with weapons, and that destroys the homeland from the inside and is the most dangerous because the enemy is known and preparations are made to confront it, but corruption and its symbols are ambiguous and hidden and practiced under flimsy and incorrect justifications. It serves the nation, its advancement and interests, in which personal interest is preferred over the supreme interest of the country.

With a comprehensive view of the seriousness of corruption, it can be asserted that it is impossible to achieve any positive steps in the process of construction and development, as long as corruption nests in state institutions and destroys them from within.

The issue of corruption, even if it exists and in varying degrees at the level of the world, its danger in Yemen is to double the fact that the country is going through exceptional compelling circumstances, which require everyone to work with high vigor and in a spirit of national responsibility that affects the nation’s interest and progress on what is below it.

The nation cannot bear two dilemmas at the same time, external aggression and corruption, which makes it imperative for everyone to work diligently and sincerely in advancing the performance of state institutions, each from his position, that is what will contribute to facing external aggression.

It is no longer a secret to anyone that the problem of financial and administrative corruption has exhausted the country’s economy due to the abuse of power and public money for private gain. Therefore, it is necessary to plan to tackle corruption as part of a comprehensive strategy that ensures the advancement of state institutions and national cadres with a high degree of responsibility.

The issuance of a law amending some articles of Law No. (40) regarding pleadings 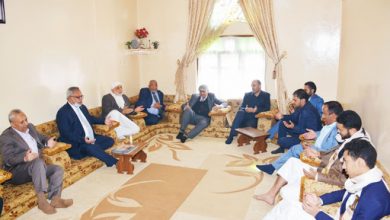