A member of the Supreme Political Council, Sultan Al-Sama’i, considered the return of the fighter Rajeh bin Ghaleb Labouza, from the Hajjah Mountains, who was fighting with the heroes of the 26 September Revolution to the Radfan Mountains, the first spark to explode the October 14th, 1963 revolution.

In the celebration held today at the Cultural Center in Sanaa on the occasion of the 57th anniversary of the glorious October 14 Revolution, a member of the Supreme Political Council, Ahmed Ghaleb al-Rahwi, affirmed that the Yemeni revolution and the Yemeni people are one and these revolutions will continue to be the revolutions of all Yemenis from Mahra to Saada.

Al-Sama’i had mercy on the souls of the martyrs Rajeh Loubouza and his colleagues and leaders of the National Front, starting with President Qahtan Al-Shaabi, then President Salem Rabia Ali, President Abdel Fattah Ismail, President Ali Nasser Muhammad and all their colleagues who had a prominent role in the bombing of the October 14 Revolution and the expulsion of the colonizer from a precious part of the homeland.

He directed the National Salvation Government to pay attention to the families of the martyrs and those who remain alive among the leaders of the Octobrist struggle in Sana’a and the governorates that fall under the new occupation .. And he said, “If the October 14 Revolution erupted from the Radfan Mountains, then the revolution against the new occupation will erupt from the coasts of Hadramout, Al-Mahrah, Shabwa and Aden. As indicated by the first indications.

He added, “The Yemenis will not remain under the occupation, as the sons of Yemen are revolutionaries and liberals, even those who fell into the arms of the new occupiers, and their voices dimmed because they humiliated and imprisoned some of them and some of their families were detained in Abu Dhabi and other capitals, and thus the strongest voice of the Yemeni people appeared in the southern governorates.”

A member of the Supreme Political Council considered the departure of the people of Yemen in Aden, Hadramout, Al-Mahra and all governorates against normalization, the beginning of a revolution, and there will be a revolution against the new occupation, and the occupier will leave despite his nose .. He said, “The coming days will clarify to the near and far that the Yemeni people are free and reject injustice, and they will be liberated, and we will be on the side of the children. The southern provinces have all the capabilities of weapons, money and men, and these provinces will never remain under the new occupation.

He added, “We call on those deceived by them to return to the homeland before it is too late and to realize that the forces of aggression do not want good for Yemen. Return to Sana’a, Sanaa is the capital of all Yemenis. Return and we will receive you with arms, because Yemen is accommodating for all and we will not be but brothers and we will agree on a new system of government so that all Yemenis will be partners in power. And wealth ”.

For his part, Prime Minister Dr. Abdulaziz Saleh bin Habtoor, in his speech, expressed his congratulations to the revolutionary leadership, the Supreme Political Council and the masses of the Yemeni people inside and outside the homeland, as they celebrated their great victories at the level of the military and security arenas, with this glorious revolution that started from Mount Radfan Shamaa, led by the heroic martyr Rajeh Ghalib bin Labouza.

At the same time, he paid tribute to Boza’s comrades from the vanguards of the National Front, the Liberation Front, and all the revolutionary forces that worked to defeat British colonialism from the homeland.

He said, “On this occasion, we pay tribute to the leader of the revolution, the beloved Abdul Malik Badr al-Din al-Houthi, as he directs the march of this revolution and this great liberation work that he is leading at the level of the fronts in general, and to His Excellency President Mahdi Al-Mashat, Chairman of the Political Council and members of the Political Council who lead the liberation work under these circumstances. Complex and difficult ”.

He added, “We celebrate for the sixth year in a row here in Sanaa these big events on September 21, September 26, October 14 and November 30, the Day of Evacuation. We also celebrate the steadfastness of the heroes who defend fiercely and with full vision of the principles of these great national revolutions that were launched under the leadership of Yemenis.”

He continued, “This memory has great and great meanings because the October 14 revolution was carried out by staunch militants who were seeking their resolve from their brothers in the northern governorates, as we call it today, who supplied them with weapons from Sana’a, Taiz, Al-Bayda and the rest of the Yemeni governorates.”

The Prime Minister stated that had it not been for the fraternal support and the great support that the Liberals made in what was called the Yemeni Arab Republic, the October Revolution would have faltered as a result of the internal conflict between the National Front, the Liberation Front and the rest of the liberation work factions.

He pointed out that this is a real fact and this is a history that should not be forgotten .. indicating that there are voices heard by everyone who do not know the true depth of the meaning of the homeland or the history of this part of the globe.

Dr. Bin Habtoor lammed the terminology that calls for a break from the Yemeni identity from what is called the Arab South .. He said, “We did not hear or read in history that there was a part called the Arab South except only in the forties and fifties of the twentieth century because this is the term British colonialist.”

He added, “As a reminder that most of the fighters who faced British colonialism are from all regions of Yemen, there are big names that fought alongside the revolutionaries of the National Front and the Liberation Front in order to expel the British colonialist from the people of Taiz, Ibb, Sana’a, Hajjah and the rest of Yemen.”

He denounced the colonial language that is being circulated to the current generation of young people, with support from the countries of aggression and occupation, Saudi Arabia and the Emirates, which speak of northerners and southerners.

He said, “I confirm from this hall, from this stage, and in this remarkable official and popular presence that we are speaking in the language of Yemen, which has risen greatly at the level of the past and the present and will naturally rise upon achieving victory in the future.”

He mentioned that the Yemeni people in all ages and ages raised the name of Yemen high and did not accept the principle of defeat at all, but it resisted and vanquished all its enemies .. He said, “From our modern history, the colonialists know that we have resisted them with all courage, and today the new aggressors realize the most meanings of steadfastness, intransigence and resistance for our people.”

The Prime Minister considered this occasion an important milestone for everyone to remember the nation’s revolutionaries from September 1962 until the moment, and the long column that sacrificed for the Yemeni unity is the most prominent event in the life of the Yemeni people that should be adhered to as it is the achievement that brought Yemenis their dignity, pride and glory.

Ibn Habtoor concluded his speech by expressing thanks to all the forearms, minds and ideas that preserved the home front, which everyone enjoys with its cohesion and as a condition of victory over the two states of the Saudi-Emirati aggression under the auspices of the United States of America.

And at the ceremony attended by the President of the Supreme Judicial Council, Judge Ahmed Yahya Al-Mutawakel, Speaker of the Shura Council, Muhammad Al-Aidarous, President of the Supreme Court, Judge Essam Al-Samawi, Deputy Prime Minister for Security and Defense Affairs, Lieutenant-General Jalal Al-Ruwaishan, Interior Akram Attia, National Vision Mahmoud Al-Junaid, Deputy Speaker of the Shura Council Abdo Al-Jundi, and members of the Council of Ministers and Representatives The Shura Council, military and security leaders, the mayor of the capital and a number of governors of the occupied southern and eastern governorates, Minister of Culture Abdullah Al-Kabsi delivered a speech, in the beginning, stressing the importance of celebrating the 57th anniversary of the glorious October 14 Revolution.

He said, “It is a pleasure for our great Yemeni people to celebrate the October Revolution, which is a dear occasion that evokes feelings of elation and pleasure in the souls, as the facilitator of the struggle culminated in a supportive victory represented in the expulsion of the colonizer on November 30, 1967 AD.”

Al-Kabsi stressed that the Yemeni people do not accept grievance or abuse, and whoever seeks to humiliate them and undermine their freedom, they will be destined for defeat, shame, humiliation and dishonor.

“Our people, while celebrating the revolution holidays, September 21, September 26, and October 14 are capable of embodying their ability to be saved from domination and subordination, whatever the price it costs, and this is what today’s conquerors who aspire to the goodness and capabilities of the Yemeni people must realize from the Arabs who rushed to normalize with the Zionist enemy and mocked their potential and their wealth,” he added. To serve the nation’s enemies and achieve the goals of their projects that are incompatible with human principles and ideals.

The Minister of Culture pointed out that the Yemeni people, who were able to defeat the most powerful force on the face of the earth, that had dominated a part of Yemen for more than a hundred years, are today more than ever able to expel the new invaders and drive them out of the Yemeni land trampled upon.

Whereas, the speech of the militants of the Yemeni revolution, delivered by the Governor of Hadhramaut, Luqman Paras, referred to the importance of celebrating the October 14 Revolution, which started from the Radfan Mountains and made sacrifices in order to achieve independence on November 30, 1967 AD.

Paras pointed out that talking about the stages of the October 14 revolution needs history writers, whether from contemporary military leaders or through documents.

He said, “Let me talk about the first start of the October revolution and the period of liberation struggle against British colonialism and its agents, because we need a revolution to expel the new colonialist that has the reasons for success under the leadership of Mr. Abdul-Malik Badr Al-Din Al-Houthi and to reform what dictators and the new colonialists destroyed.”

Governor Paras affirmed that since its launch, the October 14 Revolution has faced conspiracies, intrigues, threats and assassinations, and despite that it went on to achieve its goals through work and the participation of many different sectors, including teachers, workers, soldiers, women and fishermen.

He considered the victory of the revolution the fruit of the struggle against the colonialist, and the fluctuations that occurred after the colonialists emerged from the external factors that want to harm the nation, as is happening today for the September 21 revolution, which came to complement the September 26 and October 14 revolution, and the struggle against tampering with the wealth and goods of the nation from neo-colonialism.

Paras expressed regret that some forgot the futility of the British occupation and colonialism in the south for more than 138 years, ignoring the sacrifices of the October 14 revolutionaries in order to defeat the colonialist and establish the values ​​of freedom and national sovereignty.

The ceremony included two poems, by Sheikh Saleh Sa’il and Najran al-Jabri, which expressed the occasion, its importance and the struggle spirit of the Yemeni people who refuse injustice and subservience to the colonialist and its subversive and disruptive projects, in addition to an artistic paragraph 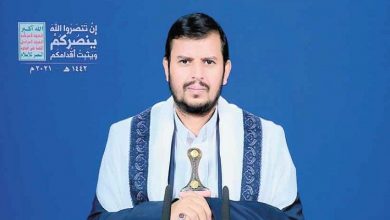