In Sana’a, the Ministry of Transport and its affiliated bodies and institutions organized an event to celebrate the seventh anniversary of the glorious September 21 revolution.

At the event, Deputy Prime Minister for Services and Development Affairs, Dr. Hussein Makbouli, indicated that the September 21 revolution embodied the aspirations of the Yemeni people and their aspirations for freedom, dignity, independence, national sovereignty, and an exit from the mantle of foreign domination and tutelage.

He reviewed the achievements of the September 21 revolution politically, militarily, economically and socially, and said, “Thanks to God, Yemen has a national vision for building state institutions that will contribute to creating a prosperous future for the country that enjoys security, safety and reconstruction.”

Dr. Maqboli considered the existence of an honest revolutionary leadership and the people’s support around it and the system of principles, values ​​and morals that the Yemeni people possess, as one of the most important factors and pillars of the success of the glorious revolution.

In the event, which was attended by the Ministers of Electricity and Energy Ahmed Al-Ali and the State for National Dialogue Ahmed Al-Qana’, Minister of Transport Amer Al-Marani indicated that the 21 revolution focused on the present and the future in the face of aggression and building the modern Yemeni state and its development in all fields with an ambitious vision.

He stressed that this revolution is a revolution of freedom, independence, and the preservation of the dignity of the people that embodied the faith identity, while the aggression and its mercenaries sought to obliterate it, pointing to the importance of celebrating this glorious revolution because it is a pure people’s revolution in which the forces of evil and personal interests did not interfere.

Minister Al-Marani noted that “the September 21 revolution united Yemenis under a wise Yemeni leadership, during which it achieved great achievements, foremost of which are security, safety and victory on all fronts.”

In his turn, the Deputy of the General Authority for Civil Aviation and Meteorology, Raed Jabal, pointed out in a speech by the bodies and institutions affiliated with the ministry to the great gains achieved by the September 21 revolution for the Yemeni people in all developmental, economic and social fields.

He stressed that “the September 21 revolution expressed the aspirations of the Yemeni people in building and reconstruction, in the face of aggression and preserving their wealth from looting.”

Raed Jabal   considered  the September 21 revolution an important station in the lives of Yemenis that achieved freedom and independence.

The event, which was attended by the Governor of Lahj, Deputy Minister of Civil Service and Insurance Abdullah Al-Moayad, the Undersecretaries of the Ministry of Transport and heads of its affiliated bodies and institutions, included a poem by the poet Moaz Al-Junaid, a popular operetta and an expressive painting. 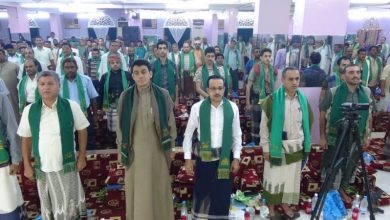 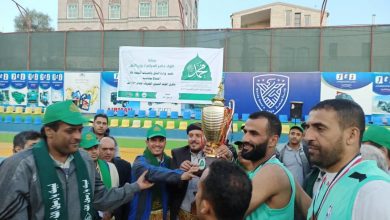